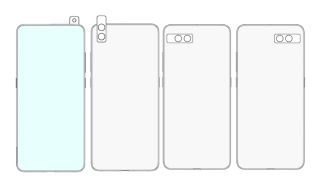 Xiaomi is back with yet another one of its full-screen design patents. Just like the previous ones, the new patent has a unique camera module designed with a hidden selfie camera.

As spotted by MyFixGuide, the patent with the license number CN 305868884 S was applied for by Beijing Xiaomi Mobile Software Co., Ltd. almost a year ago. CNIPA, which is the Chinese Authority for approving patents with new concepts and design, has published the patent only today.

Speaking of which, the patent shows that there are five types of camera layout. Beginning with the front, it is devoid of any notch as the front camera is hidden inside the arrangement tucked in between the camera layout and the rear fuselage.

One of the mechanisms seems to make the camera pop out vertically from the top. The first layout has the camera stack placed vertically on the right side. When triggered, the arrangement seems to slide out and reveal the front camera which otherwise is hidden inside the frame. Similarly, the second and third designs have the same arrangement in the middle and the right side respectively.

The second major mechanism places the same camera stack horizontally on the left and right ends. The arrangement moves left and right, according to the design, to reveal the selfie shooter. While the use case of this is still a doubt, Xiaomi could have adopted the design to present it as an alternative to the under-screen design, which is still in the testing phase.

Further, we can spot a Type-C port and speaker grills at the bottom. The top portion is plain frame meaning we are going to miss out on the 3.5mm audio jack if the design comes true to life. The right side has the power and volume buttons while the left also has a SIM Card slot and a lonely button which could be used to trigger the voice assistant.

Not all patents see the light of the day, but if Xiaomi feels confident enough, they can bring it to life just like the flexible display with UTG that is being planned lately. And with the under-screen camera tech getting trickier every month, it might just happen.