Yet Another Amazon Worker Has Died of Coronavirus 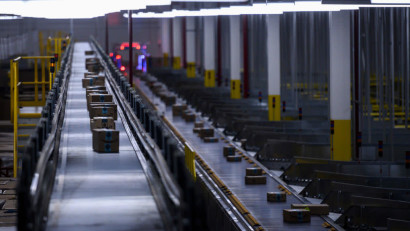 One warehouse associate at JFK8—Amazon’s massive fulfillment center in Staten Island, New York—has died of the novel coronavirus, in what is at least the third such death among the company’s ranks.

JFK8 has one of the most visible facilities in the network of late, when workers walked off the job at the end of March, largely in protest of what they felt was an inadequate response on the company’s part to the pandemic. According to The Verge, which first reported this most recent death, at least 29 workers at this facility have contracted covid-19. Warehouse associates’ concerns were lent additional credence when the state’s Attorney General, Letitia James, described safety standards at JFK8 as “inadequate.”

While Amazon did initially institute some policies to address its workers’ needs during this unprecedented situation—a small pay raise, no-penalty unpaid time off—it has already begun to roll back some of those policies. More worryingly, employees in its ranks that have been critical of Amazon have found themselves out of a job, including two who worked at JFK8. The company even considered a smear campaign against Chris Smalls, one of the walkout organizers, referring to him as “not smart or articulate.”

No official data has been made public as to how many Amazon workers have contracted the virus so far, though workers have been attempting to catalog these instances themselves. Previously, Amazon workers at Hawthorne, California and Tracy, California fulfillment centers have died of coronavirus, as has a Whole Foods worker in Portland. A spokesperson declined to comment on whether or not there have been other deaths.

According to the company, the JFK8 associate who died was last on-site April 5, and through a review of video footage, Amazon does not believe any other individuals exposed this now-deceased employee, nor did he expose others. The associate tested positive on April 11 and died yesterday. While Amazon offers two weeks of pay to workers under quarantine, it’s not yet known if this employee was receiving any form of income during the last week of his life.

In a statement to the press, an Amazon spokesperson wrote, “We are deeply saddened by the loss of an associate at our site in Staten Island, NY. His family and loved ones are in our thoughts, and we are supporting his fellow colleagues.”

In New York, deaths from coronavirus are nearing 20,000, while worldwide the pandemic has so far claimed over 250,000 lives.