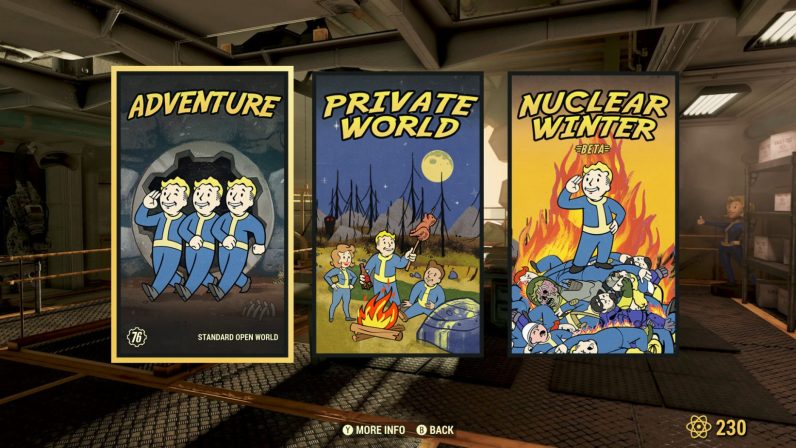 “War never changes.” So opens every Fallout title I’ve ever played. But, thankfully, Bethesda‘s latest post-apocalyptic wasteland adventure, Fallout 76, has gone through a steady stream of changes since its launch in 2018.

Initially released to mixed-reviews, the franchise’s first multiplayer offering has grown into its own unique blend of MMORPG and Bethesda-style shooter. If you haven’t played 76, it’s like Fallout-lite. It uses a modified version of the Fallout 4 engine to host dozens or hundreds of players at a time in persistent online-only game worlds.

I checked it out at launch and was underwhelmed. It was fine, but a lack of NPCs (non-playercharacters you can interact with) and an overabundance of real humans turned me off to the whole idea so I didn’t stick with it.

Bethesda‘s since remedied both of these issues with optional add-ons in the form of the Wastelanders DLC and its new “Fallout 1st” private servers. The former adds in an entire new quest line complete with a variety of NPC characters. Instead of trudging along the Appalachian wasteland following a breadcrumb trail of notes, you’ll engage actual NPCs in conversations just like you would in traditional Fallout games.

That’s all well and fine, but it doesn’t solve my biggest problem with MMORPGs: immersion. It’s hard for me to get into a game when there’s dozens of human players bopping around all over the place serving little-to-no purpose other than to remind me I’m playing a video game. This is why I don’t usually play online-only games. Normally, I’d just walk away and play something else.

But this is Fallout, and Fallout is extremely my jam. So I decided to give it another go. And, honestly, with just the Wastelanders DLC, it really does finally feel like Fallout. If you were on the fence at launch, Wastelanders should be enough to make it worthwhile.

In fact, you might even make some friends in the wasteland if you’re more social than me. The servers I played on were busy and over the course of a handful of hours playing publicly I didn’t have a single negative experience. There doesn’t seem to be much griefing in Fallout 76.

However, despite the fact that the players I came across were friendly and helpful, I still wasn’t satisfied. Wastelanders makes 76 feel like a real Fallout game to me, but all the random players made it difficult for me to immerse myself in what was finally going to be my story.

In Fallout 3 and 4, you’re kind of shoehorned into this big dramatic plot that centers on your character. I won’t spoil it for those who haven’t played them, but both games have you searching for lost family members. They’re both great stories, but I always wished that my character’s role in the wasteland was more generic. Maybe I don’t want to have a family in the nuclear apocalypse.

Fallout 76 doesn’t try to tell you who you are as much as the other entries, and that suits me just fine. In fact, about 20 levels in, I like my 76 character a lot more than my 3 and 4 primaries (though, The Courier from Fallout: New Vegas will always have a special place in my heart).

So the problem was that I finally got to be the unique, mysterious character I’ve always wanted to be in a Fallout narrative, but so did everyone else. Enter Bethesda‘s private server subscription, “Fallout 1st.”

For $13 a month you get access to a private Fallout 76 server for you and up to seven other players. The subscription comes with a monthly allotment of currency for use in the game‘s cosmetics store worth more than the cost of the subscription itself, and a number of subscriber-only benefits and items.

For me, it’s a no-brainer. My fiancee and I can have uninterrupted date nights in the West Virginia wasteland and we always get first crack at the best loot on the server. There’s no PVP to speak of – though, I suppose we could invite some rowdy friends – and if I don’t like the way someone’s acting I can just kick them off my server.

It does get a little lonely when I’m playing by myself now, but that’s just because playing Fallout with people I like is actually a lot of fun. Best of all, I can always use my characters in a regular game server if I want to mingle with strangers. And, if I hit it off with anyone cool, I can invite them back to my place where we can be alone. Only one person needs to be a Fallout 1st subscriber for you and your friends to play on a private world together.

Fallout 1st may not be for everyone, the price is a bit off-putting. But, honestly, it’s made the game so enjoyable for me that it’s become my go-to stress reliever during the pandemic. Life’s pretty good in the wasteland. And thanks to some excellent recent updates, it’s getting better all the time.

Read next: Instagram now makes it easy to delete troll comments in bulk