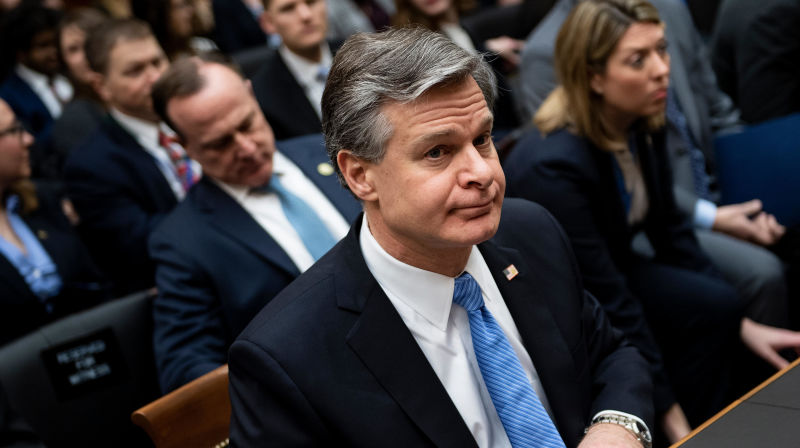 A bipartisan amendment that would have prohibited law enforcement agencies, such as the FBI, from obtaining the web browsing and internet search histories of Americans without a warrant failed to pass in the U.S. Senate on Wednesday by a single vote.

Twenty-seven Republicans and 10 Democrats voted against the amendment to H.R. 6172, which will reauthorize lapsed surveillance powers under the Foreign Intelligence Surveillance Act (FISA). The amendment offered up by Sen. Ron Wyden, Democrat of Oregon, and Sen. Steve Daines, Republican of Montana, would have forced the government to get a warrant before obtaining the internet search history of Americans.

Under Section 215 of the Act, the government can compel phone companies and internet service providers to turn over such data, if it is deemed vaguely “relevant” to a terrorism or counterespionage case.

In a speech on the Senate floor ahead of the vote, Sen. Wyden questioned whether law-abiding Americans should have to “worry about their government looking over their shoulders” at all times of the day.

“The typical American may think to themselves, I’ve got nothing to worry about. I’ve done nothing wrong. The government has no reason to suspect me of anything. Why should I worry?” Wyden said. “Unfortunately, the question is not whether you did anything wrong. The question is whether a government agent believes they have the right to look at your web searches. In other words, it’s open season on anyone’s most personal information.”

Wyden and Daines both used President Trump as an example of why the amendment should be passed—but for virtually opposite reasons.

Wyden pointed to Trump’s frequent calls for investigations into his political enemies and noted the attorney general, William Barr, had “injected himself” into investigations that personally affect Trump’s political interests; a likely nod to the Justice Department’s recent bid to exonerate Michael Flynn, who pleaded guilty in December 2017 to lying to the FBI about his conversations with Russian Ambassador Sergey Kislyak. (A U.S. district judge put a hold on that effort Tuesday, saying he expects third-parties will seek to intervene in the case.)

Conversely, it was Daines’ contention that such surveillance powers might be weaponized for scurrilous attacks against some future candidates running for office by partisan law enforcement agents. “We saw what a handful of scornful government bureaucrats did to President Trump when they abuse FISA to serve their political motives,” he said. “Our own government spied on an American citizen, a political adviser to then-candidate Trump with no oversight. And what happened to President Trump can happen to anybody, for any purpose. And that is a very serious problem.”

In December, an inspector general report outlined what the New York Times’ Charlie Savage called a “staggering dysfunctional and error-ridden process” in reference to the FBI’s procurement of a FISA wiretap warrant for Carter Page, a former Trump campaign advisor. The litany of problems with the FBI’s surveillance applications, Hina Shamsi, director of the ACLU’s National Security Project, said at the time, “demonstrates how the secrecy shrouding the government’s one-sided FISA approval process breeds abuse.”

“For far too long the Patriot Act and the Foreign Intelligence Surveillance Act, commonly referred to as FISA, have been used to trample the civil liberties of American citizens,” Daines said in floor speech Tuesday morning.

In a statement to Gizmodo after the vote, Daines said he would continue pressing for reforms to FISA, saying it is “critical” to the privacy of all Americans.

The final vote on Wyden-Daines Amendment was 59-37. Sixty “ayes” were required for it to pass. Members had to be physically present to vote.

Below is a list of senators, by party, who voted against the reform (and those who didn’t vote at all):

Sen. Alexander is currently in self-quarantine due to a member of his staff testing positive for covid-19. Senators Sanders, Sasse, and Murray did not respond to a request for comment. We’ll update if they do.

Sen. Mark Warner’s office said that while the Virginia senator is “sympathetic” to the reforms offered up by Wyden and Daines, the security and law enforcement authorities in the bill are too important. Warner, vice chair of the Senate Intelligence Committee, remains concerned that changes to the bill will delay its passage in the House, perhaps permanently.

Update, 4:45pm: A separate amendment proposed by Sens. Mike Lee (R-UT) and Patrick Leahy (D-VT) was passed by the Senate. It includes various provisions designed to protect Americans and their civil liberties. Among other reforms to the role of amicus curiae, the amendment requires the FISA court to appoint “one or more” individuals with privacy and civil liberties expertise in cases that raise “significant concerns” with respect to First Amendment-protected activities.

It further enshrines specific requirements for the mandatory disclosure of exculpatory material, saying the government must bring forth any information that “might reasonably call into question the accuracy” of a surveillance application, or any information that would “otherwise raise doubts” with respect to the findings required under the application process.

Sean Vitka, a senior policy counsel at Demand Progress, called the amendment’s passage “a major victory for Americans’ civil liberties,” despite the Wyden-Daines Amendment being shot down earlier this afternoon.

“The Lee-Leahy amendment ensures an independent voice has access to and can raise issues with FISA surveillance targeting religious groups, political groups, and the media. The underlying bill remains broken, but adoption of the Lee-Leahy amendment represents a privacy victory well beyond what many believed to be possible,” said Vitka, adding that it marks a “long-awaited turn for privacy in Congress, and the start of many more fights to restore it.”

The full amendment can be read here (h/t Lawfareblog).

“Leadership of both parties and in both chambers of Congress attempted to force these sweeping surveillance powers through without any amendments or public debate. Thankfully, a bipartisan group of senators derailed the bill on the Senate floor in March, and secured a deal to debate privacy-strengthening amendments.”

The push by members of Majority Leader Mitch McConnell’s own party to shield Americans from a more privacy-invasive bill shows, Fulton said, just how “out of touch” he is, “even within his own party.”

“While it was hard to lose by one vote on an amendment that would have secured our internet-browsing and search histories with a warrant, the adoption of an amendment expanding the role of amici curiae is a huge win for civil-liberties champions,” she said, adding: “The amendments are a step in the right direction, and the House should do more to protect the rights of everyone before granting intelligence agencies any such authority.”