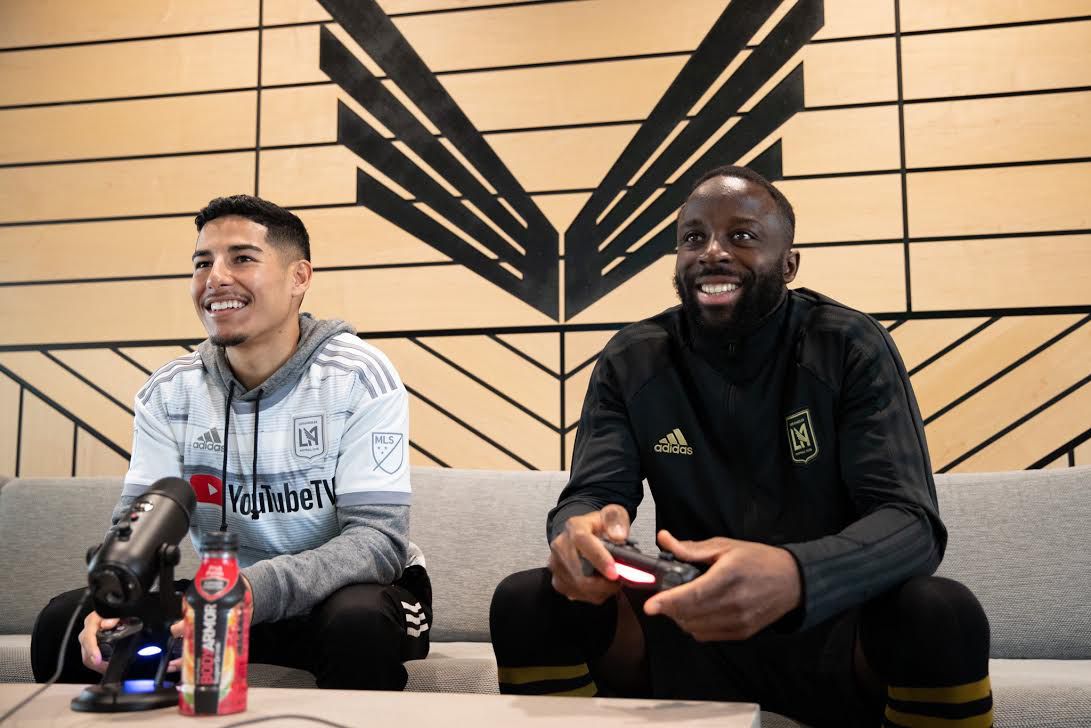 Los Angeles FC forward Adama Diomande is bored. With professional sports on indefinite hiatus throughout most of the world, he misses being on the field with teammates and competing in front of thousands of fans every week. Like the rest of us, he’s been stuck at home; that means trying his best to stay in shape, including jogging around the city at night, and keeping up with friends and family through video chats. But he’s managed to satiate his desire for competition by taking part in eMLS, an esports tournament that pairs professional soccer players and FIFA pros. “I love competing,” Diomande says. “I just love to win.”

Like most professional sports leagues, MLS has been slowly taking steps into the video game space, but that process has accelerated in recent weeks. In our current climate, the line between real and virtual competition has become hazier than ever. Premier League players are competing in FIFA, the NBA 2K League is airing on ESPN, Serena Williams and Naomi Osaka are playing Mario Tennis, and traditional esports leagues are seeing record-breaking viewership.

MLS’s original plans for eMLS changed as it adapted to our current socially distanced reality. Instead of a virtual league where FIFA players, each representing a specific team, compete against each other, MLS got some of its players involved as well. The eMLS Tournament Special pairs one IRL pro with a virtual counterpart, and it’s divided into four small tournaments. The winner of each moves on to a knockout tournament later this month. Diomande and his FIFA partner Martin “RemiMartinn” Oregel led LAFC to an upcoming semifinal appearance by winning the first tournament in April.

According to Diomande, he didn’t spend much time preparing for the competition because he already plays FIFA — as well as games like Call of Duty and NBA 2K — regularly. It’s something that’s been a part of his life from a young age. “It kept me out of trouble,” he says. For Diomande, video games are just another outlet for his competitive drive, but he’s also found — with FIFA, in particular — it’s been helpful for how he performs on the field.

“It helps a lot with reactions and reflexes and how you see things,” he explains. “That’s why when I play FIFA, I play at a fast tempo so I’m a step ahead of my opponents, always. I know where to make the next pass when I get the ball because I see the whole pitch. They’re small details, but they help me a lot.”

That said, competing in a tournament like eMLS is a bit different than playing with friends. Diomande notes that there’s a different vibe between the MLS players and their FIFA counterparts. “The gamers are more quiet,” he says. That’s particularly true when it comes to trash talk, which he believes is an important part of his game. “I’m in their head and they don’t even know what to do anymore,” Diomande jokes. “That’s how I’m winning.”

His first match was arguably the biggest, as he went up against Javier “Chicharito” Hernández from cross-town rivals LA Galaxy. “I wasn’t so nervous, but when the game started, I got some sweaty hands automatically because I just wanted to win,” Diomande says. And the trash talk definitely came into play.

“When the game started, I got some sweaty hands automatically.”

“I beat Chicharito the first game. I told him he didn’t have a chance, and he was just complaining that his overall rating was bad. I was just laughing and focusing on my game. When he started to talk a lot, I chipped it to Carlos Vela, and I scored with myself. He didn’t notice because he was complaining.” He went on to win the next game against the Chicago Fire with a convincing 4-0 scoreline.

For now, Diomande and his partner are left to sit and wait. MLS teams have just started slowly getting back to individual training sessions, but Diomande’s next match on the virtual pitch isn’t until May 17th against Kansas City, with a spot in the finals up for grabs. He says he’ll watch some of the upcoming games and take notes, but he likes his chance no matter who he comes up against.

“My chances are always good,” he says. “I’m always winning, no matter what. That’s me.”