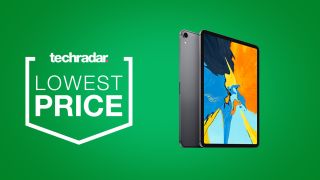 iPad Pro deals have been raging ever since the 2020 model landed, and this week we’re seeing the lowest prices yet on impressive 1TB models in both the US and UK. That means whichever side of the pond you’re on you can grab a 2018 iPad Pro with plenty of storage for less than ever before, and we’re here to show you where to shop. These are some popular discounts, and over in the UK these iPad Pro deals are part of the Currys clearance event which means when they’re gone they’re gone so move quickly to secure yours.

You could usually grab these iPad Pro tablets on sale for around $1,199 / £1,059 before this week, a price range that’s been stuck above a grand since the tablet’s release. However, in chopping $245 / £110 off these previous discounts, Amazon and Currys have brought that price down to three figures. That leaves the 11-inch iPad Pro with 1TB of storage sitting at $949 in the US and £949.97 in the UK.

Those are some excellent iPad Pro deals to take advantage of if you’re after a powerful tablet with plenty of storage for bigger projects and don’t fancy breaking into the $1,000 / £1,000 range for the pleasure. These offers are highlighted below, but we’re also rounding up all the latest iPad sales further down the page if you’re shopping for a cheaper release or the latest 2020 model.

iPad Pro deals in the US

iPad Pro deals in the UK

Apple iPad Pro (2018) 11-inch – 1TB WiFi + Cellular | £1,249 at Currys
If you don’t want to be tied to the perils of public WiFi, you can also pick up this cellular model for £300 more than the cheaper device above. You’ll have to take out a separate data contract for your 4G to work, however, so remember to factor that cost in as well. This deal is part of Currys’ clearance event, which means when it’s gone it’s gone, however.
View Deal

If you’re looking for something a little less expensive, you might also want to take a look at the cheapest Samsung tablet prices, or the latest Microsoft Surface Pro deals and bundles. Want to stick with Apple? Check out our selection of cheap MacBook deals and sales.