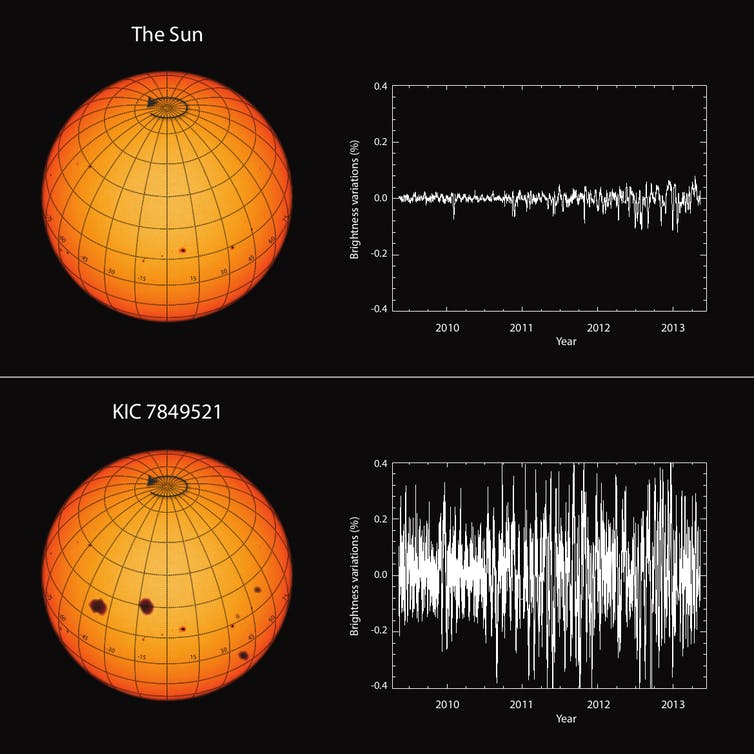 All stars emit varying amounts of light over time – and the Sun is no exception. Such changes in starlight can help us understand how habitable any planets around other stars are – a very active star may bombard its planets with harmful radiation. Now a new study, published in Science, shows that the Sun is significantly less active than other, similar stars.

In many stars, the observed variation in brightness is driven by their internal magnetic field. When parts of the magnetic field breaks out through a star’s surface, it can cause dark regions known as starspots or brighter regions (known as faculae) in the star’s atmosphere. As a star rotates on its axis, so the bright and dark regions pass across the face of the star from our viewpoint, causing a periodic change in brightness of the star as a result.

Some of the most extreme examples of variable stars are eclipsing binary stars and pulsating stars. In the former, the light variation is due to an external effect: a pair of stars orbit around their common centre of mass, repeatedly blocking some of their partner’s light from our point of view. If the orbit is viewed edge-on, the brightness of the star will appear to decrease significantly at regular intervals.

In a pulsating star, the light variation has an intrinsic cause: the star literally pulses in and out, becoming larger then smaller, brighter then fainter, with a regularly repeating pattern of changing brightness. Pulsating stars can change in brightness by a factor of ten or more with each cycle. Both of these classes of stars are favourite targets for astronomers, as their light variation may be used to probe the dynamics or structure of a stellar system.

Calm before the storm?

The stellar brightness variations due to bright and dark spots rotating across our line of sight are generally of much lower amplitude though. The Sun’s brightness only varies by a fraction of a percent as it rotates once every 24 days. Even such small changes can affect the Earth’s climate on timescales of decades or its atmospheric chemistry on timescales as short as months or days.

We have records of sunspots dating back to 1610, and they show that the Sun regularly goes through a cycle every 11 years during which the number of sunspots alternately reach a maximum and then virtually disappear entirely. When sunspots are at their most prevalent, the Sun is particularly active – outbursts of light known as solar flares and coronal mass ejections are more common. These can have significant impact on our lives here on Earth. As well as causing the northern lights, they can also disrupt satellites and damage power lines.

In the new study, researchers compared a detailed 140-year record of the Sun’s brightness with the light curves of a set of solar siblings observed by the Kepler satellite over the course of four years. They looked at stars whose temperature, mass, radius and age were all similar to the Sun, and selected 349 stars for which the rotation period could be measured as between 20 and 30 days.

The astronomers measured a range of variability from 0 (no change in brightness) to 0.75%, with an average around 0.36%. By taking random four-year segments of the Sun’s light curve, they found the typical variability of the Sun’s brightness was only 0.07% – and even at its greatest was no more than 0.20%. They therefore concluded that most stars of the same type as the Sun are more active than the Sun.

So does this mean that the Sun is genuinely different to other stars in the same class? Astronomers know that, as stars age, their rotation slows and they become less magnetically active. At some point they may transition to a new phase of very low activity – but we don’t know exactly when that transition occurs. Perhaps the Sun is approaching such a stage in its life. Alternatively, could it simply be that, in the 140 years of solar data used, we have only sampled a relatively quiet period of the Sun’s activity – might it have been more active at other times?

This possibility is more worrying. It might suggest that the Sun could undergo periods when its variability is much higher, with a corresponding increase in magnetic activity and stronger outflows that could disrupt life here on Earth.

Perhaps comfortingly, measurements of certain isotopes – variants of chemical elements with lighter or heavier nuclei – on Earth can be used to track solar activity over the last 9000 years. They reveal that the variation of the Sun’s brightness has not changed significantly on this timescale either.

Understanding stellar variability is vital for assessing the habitability of exoplanets. In extreme cases, stellar flares may strip the atmosphere from an otherwise habitable exoplanet, rendering it unsuitable for life. The recently discovered planet orbiting the nearest star, Proxima b, for example, is in its star’s habitable zone, but Proxima Centauri itself is a very active star and the planet is most likely bathed in harmful radiation from stellar flares.

This new study may indicate that only very inactive stars such as the Sun are likely to host habitable exoplanets. Perhaps we should be grateful that the Sun is among the more sedate of its siblings.

This article is republished from The Conversation by Andrew Norton, Professor of Astrophysics Education, The Open University under a Creative Commons license. Read the original article.